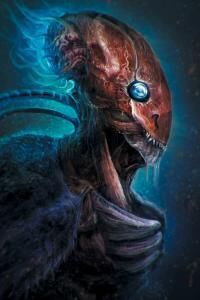 Vriktik is an unlockable mind Hero.

Vriktik as well as all his rewards are illustrated by Slawek Rybka.

The magic inherent to Wanderstar made Vriktik feel at home as soon as he landed. Even the simple Feowyn can harness it, despite just a few hundred years of learning. Once Vriktik finds its source, he plans to dispose of their childish cantrips and begin to steer the planet towards the right path -- with him at the helm.

Create From the Dark.

At a certain point, Vriktik saw a massive overhaul to its design, changing it from a removal oriented hero gearing towards control to one interested in playing (cheap) actions in a quick succession.

Vriktik's abilities lends to a reactive, controlling playstyle. His level 2 and 3 rewards are both powerful control removal tools that can take care of enemy threats efficiently. Centien Ghoul can stall out an early board if not removed, and leaves behind another body when it dies, which could potentially provide more value if the unit killed had an useful ability such as Deadly or Duelist. From the Dark is one of the best hard removal spells in the game, and is often saved until later in the game to deal with stronger threats. His passive synergizes with those rewards by giving EXP for killing enemy units consistently. It is powerful in the sense that it has no special restrictions, and will trigger naturally many times throughout the course of a game. To maximize its benefit, players often run an abundance of removal in Vriktik decks such as Fireball and Incendium. His level 4 reward, the Ianian Shrike, is a strong versatile unit able to act as removal or face damage depending on the state of the game. Vriktik's final reward is a permanent passive ability that provides constant value and board presence, making any enemy unit kills provide double the advantage. If built with a sufficient removal suite, the player is usually able to control the first unit killed each turn (which could be of either player), allowing them to further leverage the passive to their advantage by choosing the exact unit they would gain.