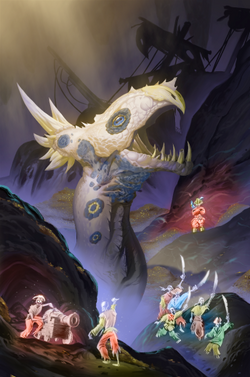 Pearlmaw is an unlockable strength Hero.

A dragon who sought to add Captain Washburn's cursed treasure to her hoard, she has instead been forced to join the ghostly crew. After several centuries, Pearlmaw has wrested control from Washburn, but being pulled into Wanderstar may have forever foiled her plans to lift the curse.

Doubloons have very unique properties when it comes to playing them. Essentially, they are just "spent" from hand rather than being played in any manner, disappearing completely, without triggering any effects or abilities. Somewhat similarly to Fast, you also don't automatically pass when you spend them. They however don't have Fast.

Pearlmaw's ability to consistently generate Doubloons allows for all sorts of powerful plays. First of all, you can simply pass your first turn, then use the Doubloon generated to gain 1 extra mana and 1 EXP next turn while playing on curve normally, and repeating each turn, technically doubling your passive EXP generation.

Another way to capitalize on these Doubloons is to save as many of them as possible, then playing them all at the same time to get enormous, valuable units like Berserk Tyrannodon or Jammy the Elemancer in play early.