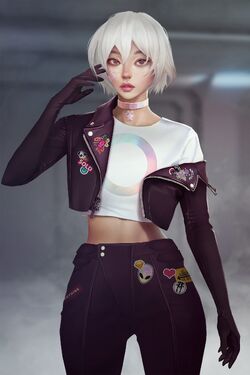 Kyung Mi is an unlockable neutral Hero that can alter her affinity by changing her Outfit.

Kyung Mi as well as all her rewards are illustrated by Raluca Porumbacu.

Fashion icon Kyung Mi was perhaps the most famous citizen of Ethea, but behind the scenes she tirelessly fought to undermine the realm's tyrannical AI regime. Wanderstar, a complete technological backwater, has tested her ability to survive. A combination of wits, adaptability, and top-of-the-line cybernetics have allowed her to flourish as always, and she remains committed to her personal war against synthetic intelligences of any kind.

Give a Strength unit in play or in your hand +1 ATK and Duelist.

Your next Mind card costs 1 less.