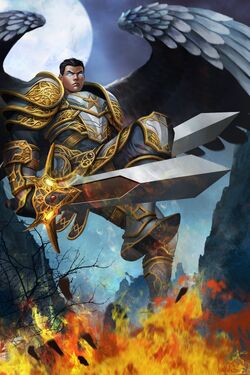 Heldim is the strength Hero players start unlocked with. His initial deck is Heldim Starter.

Heldim as well as all his rewards are illustrated by Robert Susetyo.

After rejecting the Divine Academy, Heldim chose to curry favor with the Angels watching over his home kingdom. Due to his strong sense of honor and skill in battle, they gifted him with flight, the first of his kind to do so. The last thing he remembers before waking up on Wanderstar is flying through the clouds for the first time with his mentor, the immortal Cassiel.

Protector's Vengeance: Whenever a friendly unit dies, revive Cassiel and she attacks.

Heldim's abilities lends to an proactive, tempo-based playstyle. His level up rewards repeatedly summon Cassiel and buff her, thus providing a resilient, evasive threat that remains relevant at all states of the game. Due to Heldim's passive giving 2 EXP, Cassiel could come down as early as the end of turn 3, providing strong early game tempo. It's therefore crucial for many Heldim aggro decks to have a 1 drop available on turn 1. Cassiel's free resummon means that it is valuable to trade her in combat, especially right before the player would level up again. As his passive becomes increasingly restrictive as the game goes on, Heldim decks that aim to trigger Cassiel resummons would use indirect ways to utilize the value of non-attacking units and a single attacking unit such as with Duelist cards (Onnabushi, Warchief Cronrekk), unit buffs (Soulcleaver, Morning Star), and unit count synergy cards (Democracy Demon, Rallying Shout). As Heldim's level 5 brings Cassiel back whenever a friendly unit dies, it is very difficult to prevent Cassiel's damage lategame and gives the Heldim player reach for finishing off their opponent's remaining health. Heldim's rewards bring Cassiel back from whichever zone she is in, meaning that cards that remove units from the game isn't effective against her. However, she is still vulnerable to permanent effects such as stat decreases, detrimental abilities, or silence effects.