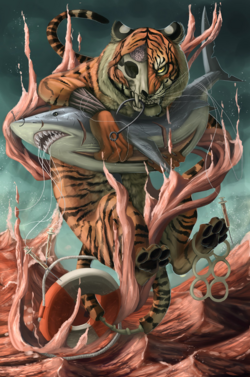 Buluc is an unlockable spirit Hero.

Buluc as well as all his rewards are illustrated by Taylor Dow.

Buluc is the god of war of a long dead civilization, and takes many gruesome forms. After the death of his followers, he wandered the cosmos for ages before being pulled into Wanderstar. He sees the planet as an easy land to conquer, as there don't seem to be any competing gods present.

Rapture: Your units have +1 ATK forever.

"Plush Buluc" is additional unlockable cosmetic Hero skin for Buluc introduced in Patch v1.0.0. Plush Buluc as well as his rewards are illustrated by Anastasia Gorbachyova. The illustrations can be found here.

Buluc's abilities lend to a tempo oriented, board-focused playstyle. His passive rewards having multiple units on board, and is less restrictive than Heldim's passive in comparison. Therefore, cards such as Giddy Gardener and Bullfrog Trainer are good inclusions. His level 2 reward feeds into his passive by generation more tokens to fill the board. His level 3 reward is a board-wide attack buff that lasts until the end of the game, rewarding the player for building up a wide board. It is the earliest "until end of game" passive of any of the heroes, with both Heldim and Vriktik's version happening at level 5, and thus is very powerful in being a permanent boost to the player's units in combat, doubling the damage potential for token strategies. Buluc's level 4 is comparatively weak but has versatility, being able to act as unit removal, face burn, or a high attack unit in combat if needed, though it is vulnerable to removal with its low health. Thus, it is beneficial to control the player's EXP amount so that they reach level 4 at the end of an off-initiative turn, so that they are guaranteed one activation with Kukul next turn on-initiative. His level 5 is once again a "until end of game" passive that increases units' offensive combat capabilities, pressuring the opponent in the lategame on health total and board position alike.